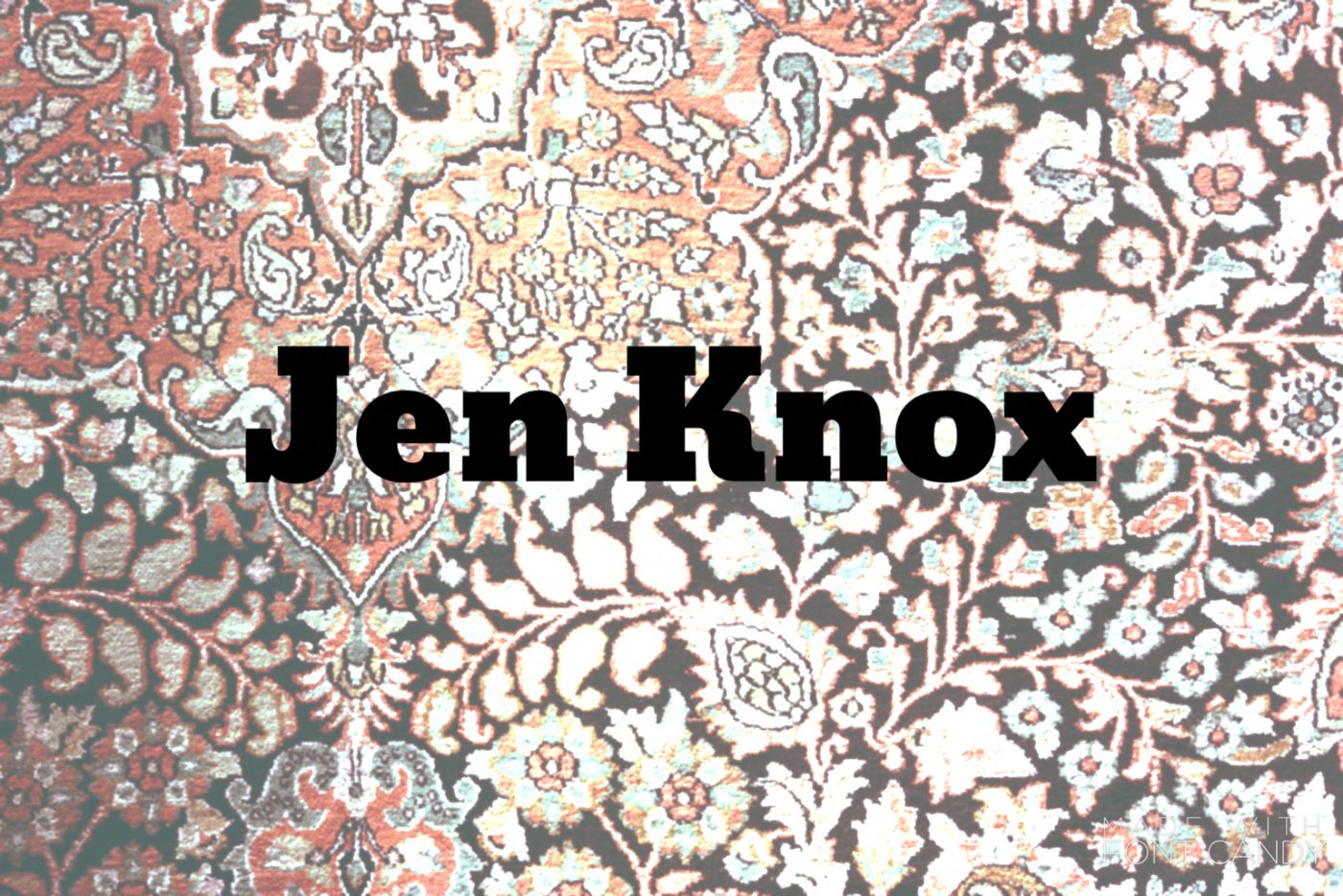 I first met Jen Knox last September. She read at Susan Tepper‘s Fizz Reading Series at KGB Bar in the East Village. Jen was part of a stellar group of readers, which included Stephanie Dickinson, JP Reese, and Roberto Carlos Garcia. I had an online connection with many writers there that night, but I was meeting most of them face-to-face for the first time. These situations can be awkward, but everyone I met that night talked to me like I was an old friend. Jen was one of the few writers there that I had no connection with, but I changed all that after I heard her read. I made sure to congratulate her and we ended up sharing a drink or two. When another writer asked me to defend the flash fiction form, I had to ignore the urge to roll my eyes. I hate to defend what I do because I feel it’s unnecessary. I write fiction. You as a reader can choose whether to read it or not. End of discussion. My response was diplomatic but made this point clear. Jen was asked the same question. We both looked at each with knowing smiles.

Jen grew up in Ohio and lives Texas. She works as a creative writing instructor at San Antonio College. Her short fiction earned the Global Short Story Prize in 2011, was chosen for Wigleaf’s Top 50 list in 2012, and earned finalist status in the 13th Glass Woman Prize in 2013. Some of her work can be found in ARDOR, Bound Off, Monkeybicycle, Narrative, and Short Story America. Forthcoming fiction can be read in Fiction Southeast and A capella Zoo. Her chapbook, Don’t Tease the Elephants, is forthcoming from Monkey Puzzle Press.

You’ve written poetry, non-fiction, memoir, and fiction. Which form did you first write and at what point in your development as a writer did you begin to diversify?

Aside from an angry and incoherent poem I wrote when I was sixteen, I didn’t write creatively (or much of anything) until college. When I did, I began by writing about my life and trying to tease out experiences and what I lived through. I was motivated as I wrote by the works of James Baldwin, Joan Didion, William Hazlitt, MFK Fisher, Michel de Montaigne, and a host of other nonfiction greats. Creative nonfiction, in both memoir and essay forms, interested me most at the time because everything about my life was in flux. I felt like I was on a fast-moving bus with no rail or seat-back to hold on to. Writing became my support in this way.

I love reading poetry, but I never set out to write a poem. The few I’ve written have come to me organically and unexpectedly, and I’m thankful for each experience. I enjoy this relationship with poetry, and I hope it maintains. I write mostly fiction now, and the main reason is because it’s fun and freeing. Fiction is about empathy at its most intimate because it’s about not only studying other people and circumstance (as well as my own), but truly imagining the existence of characters. To me, fiction mirrors the experience of reading more than any other genre. What I mean is, I never know where a story will end up, or if it will even become a full story when I begin; it’s a journey with no guide. I think I’ll stick with it for a while.

Writing fiction can feel like you’re corralling a dream, getting it down on paper, building a narrative structure around it, giving the dream a continuous, but natural order. You mentioned that writing a story is like being on a journey with no guide, but what happens after you’ve written that first draft? How do you go about “corralling the dream?”

The first draft is why I write. The process of creating and recreating characters and worlds is so gratifying. But for me, if a coherent story doesn’t just come with that first draft, it’s not going to be corralled. Granted, a coherent story can come and then I can change major details or even revamp the whole thing, but I need that foundation of fully-realized story and character(s) to build off of (or chip away at). I used to try to force stream-of-conscious work into a form, but I’ve realized that my process as a writer won’t support this.

Writing methodology is so individualized, and I wouldn’t wish mine on any good or well-intended person. My stories hinge on the storytelling first, the rhythm second, and the mechanics third. I find it difficult to write a rough draft in two or more sittings and maintain the same interest and flow I had that first day. Usually, a story is on my mind, developing, for a few weeks. Then I wait for time to write. I write the story in one sitting. I let it rest. Finally, I revise by reading aloud, tinkering with language, rereading, and looking for logic errors.

My writing method posed a challenge to the realization of a novel—a challenge that after three years I thought insurmountable. But then I got some great advice. It went something like this: Write it like you would twenty short stories. Consider each chapter its own entity. So I did. I wrote each chapter in one sitting, knowing where I wanted to begin and having a vague idea of where to end. And I’ll be damned if it didn’t work. A lot of little stories can make a big one—go figure! My methodology is inefficient because it means I need large blocks of time to write, but we writers will make time to write because we have to write.

Your story, The Suit, which appeared in May 2013 at the Burrow Press Review, is told from the point of view of “Miranda,” a loquacious bus-rider who likes to trap fellow passengers into conversations. At the heart of the story is a chance meeting. Miranda enjoys getting to know the people on the bus, but a young man in a suit changes everything. Miranda plays up the traditional, nurturer/ mother role, then after a line of intimacy is crossed, she becomes like a lioness protecting her cub, another traditional role, but one rarely shown with this much depth. Was this the change you expected your main character to make, or did her response surprise you?

This is one of those stories that didn’t come together in my head at all. But Miranda—she came to me vividly. I imagined her as I imagine any strong woman: unconcerned what people think, undeterred by negativity, unmoved by threats, and wildly generous for the right reasons. I knew her goal would be to make people smile, especially the younger people she believes are suffering from self-obsession.

Miranda was raring to go. She just kept showing up in my mind, and she was always on the bus. Meanwhile, I had no idea where the story would go. The first draft I wrote ended with Jon’s departure, and he wasn’t antagonistic at all. I let the piece sit like that for a long while, knowing it wasn’t quite right. In reading it back and revising, I expanded the daughter character and changed Jon. The daughter had been mentioned only briefly prior. My goal with the revision was to show that though Miranda could make the rest of the world smile, she had a weakness in her desperate need to protect her child and inability to do so. I knew Miranda would be strong, and I knew something or someone was going to challenge that. But when I first wrote the piece, in that first sitting, I was actually thinking Jon would become a sort of supportive character and Miranda’s antagonist would be her health. I had no idea it’d go the way it did. I love it when stories surprise me like that.

Another story of yours that left an impression on me is When Pretty People Disappoint which was published by JMWW. For most of the story, we encounter an “I” that may be male. We find out that the narrator’s father likes poker and has invited the narrator to join him in a game. The story touches on many intriguing facets about men and women, and what’s expected from the traditional gender roles. The story debunks expectations in a charming yet illuminating way at the end. I noticed the endings to most of your stories are “anti” post-modern, what I mean by that is rather than end your stories in uncertainty, you leave us with a defiant truth. Most writers struggle with endings, but yours feel organic. Are you hoping for the defiant truth to appear at the end or do you struggle to get there?

I love that phrasing: defiant truth. Yes, I do hope my characters will glimpse truth, or change in a way that allows the reader to find his/her own truth, but it takes work to get there. My initial intention is pure examination. When I sat down to write When Pretty People Disappoint, for instance, I had only the Dory character in mind. I wanted to make her comically hypocritical and give her extreme views. That was the extent of my catalyst. I wanted to figure her out. As I wrote the first draft, however, the idea that would drive the piece arrived. I knew that a shift of power would have to occur.

This is often how it happens with my writing. As I write, my vague intentions begin to solidify. My endings rarely stay the same as in the first draft, but the same idea or character shift feeds revision. According to my records, for instance, the first draft of this story was titled “Bluffing.” The symbolism of poker/strategy was very heavy-handed, especially at the end, but all the same ideas were there. The general idea of the resolution usually comes in first draft, but it’s buried. My greatest struggle is to not overstate or force-feed the ending, so this is what I focus on in revisions. Endings are delicate.

You’ve just completed a short story collection, The Getaway State and a novel, We Arrive Uninvited. Whew! Can you tell us more about these projects and anything else coming through the pipeline?

Thanks for asking, Gessy. I haven’t spoken much about any of these projects yet, and I’m excited to do so here. I have completed two short fiction projects. The first is a chapbook that will be published by Monkey Puzzle Press in 2014, entitled Don’t Feed the Elephants. It’s a collection of short stories centered on people who, in one way or another, are forced out of their routines and have to decide whether to return. The Getaway State is a full-length collection of inter-related stories, all of which take place in Ohio. Each story in this collection examines that space between intention and action. What I’m most excited about regarding both of these short story projects is the range of characters. I have some quirky folks in these books.

We Arrive Uninvited is in the polishing stages. It’s a short, 75K word novel that took the lifeblood out of me as I wrote it. It’s about a girl, Emma, who views her grandmother’s schizophrenic breaks as a sort of gift, who believes not in mental illness but that her grandmother can actually see what the rest of the world can’t. As Emma encounters her own coming-of-age struggles, she begins cutting school to visit the mental health facility. Bit by bit, her grandmother begins to tell the story of her own childhood, which is nothing short of a dark and twisted fairytale. These stories change the course of Emma’s life as she tries to determine what to believe. I wouldn’t say the work is magical realism, but it flirts with the idea.