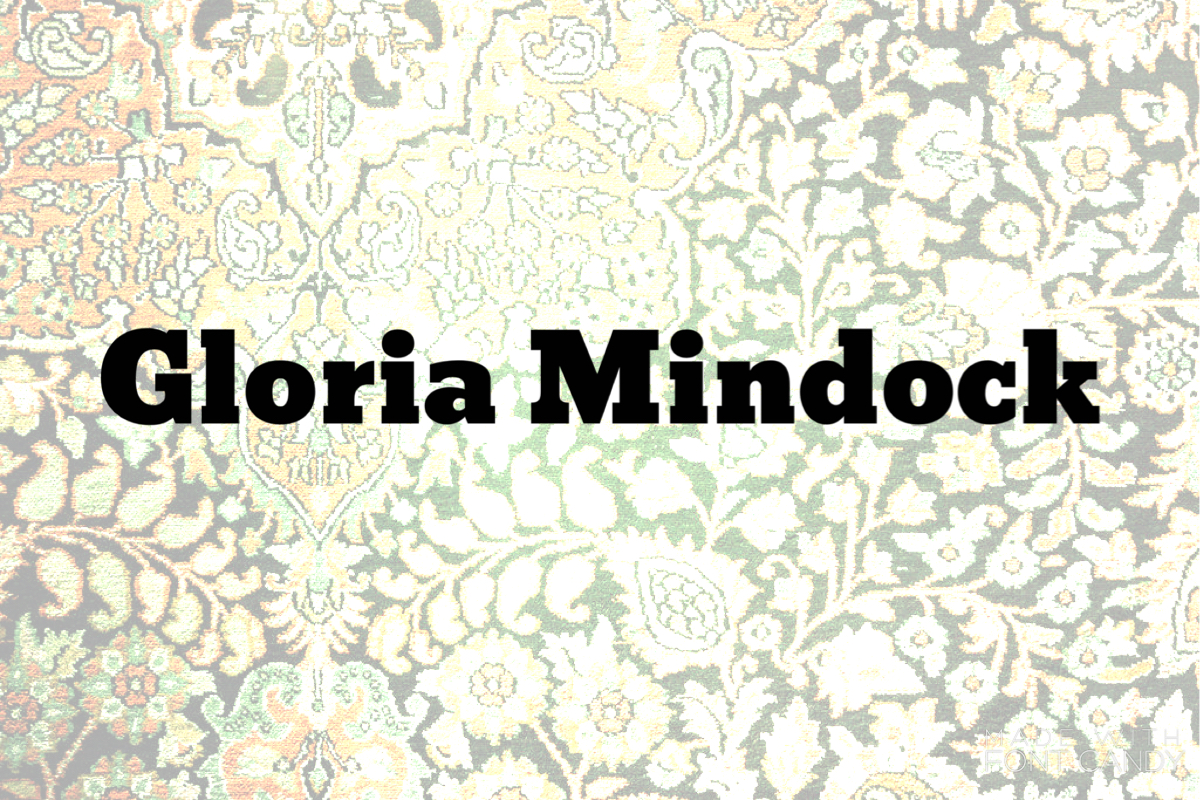 Gloria Mindock is a name that I became familiar with through friends. Gloria is a brilliant poet, editor, and publisher. She’s a major part of Červená Barva Press, where some of my favorite poets have published chapbooks. She is also a tremendous advocate for emerging and established literary voices. I was very eager to have a chat with her and find out more about her work as artist and literary extraordinaire. Gloria delivered!

Gloria is the founding editor of Červená Barva Press and the author of La Porile Raiului, translated into the Romanian by Flavia Cosma (Ars Longa Press, 2010, Romania), Nothing Divine Here (U Soku Stampa, 2010, Montenegro), and Blood Soaked Dresses (Ibbetson Street Press, 2007). She also is the author of numerous chapbooks, the latest being, Pleasure Trout, published by Muddy River Books. Gloria has had numerous publications in the USA and abroad including Poet Lore, River Styx, Phoebe, Blackbox, Poesia, Bogg, Ibbetson, Lost in Thought, Wilderness House Literary Review, UNU: Revista de Cultura, Citadela, Aurora, and Arabesques. Her flash fiction has been published in Thrice and Thunderclap Magazine.

If someone would have said to me in high school or college, that I would become a poet, editor and have books published, I never would have believed it.

I grew up surrounded by books and poetry but in college realized that I loved poetry. At that time, I was reading Keats, Shelly, Matthew Arnold, and Chaucer. Then I discovered poetry translations of Eastern European writers, and started writing. First, I wrote experimental poetry but switched to writing lyrical and metaphysical poetry. I was definitely influenced by the Eastern European poets. I found that the poetry in the USA, at that time, was too academic for my taste. With reading Eastern European writers, I felt like I found home.

I write poetry because I have to. It is in my soul. There is no explaining it. It is just there, like breathing. I write about life, death, angels, and the atrocities. These are all heavy topics about our journey on earth. It is just who I am, a poet. I write because I write. It is as simple as that.

You are also a performer, musician, editor and publisher of Červená Barva Press. I’m curious what the story is behind the name of your press and what led you to establish it.

I have been publishing since 1982 and in 1984, co-founded and edited the Boston Literary Review/BLuR which closed down in 1994. After that, I concentrated on my own writing and did small publishing projects but missed publishing magazines and books so in 2005, I founded Červená Barva Press. The name is Czech and means “Red Color.”

I chose this name because I am influenced by Eastern European writing and Vaclav Havel. He was such an inspiration to me as a playwright, dissident, president, and all he did for the Czech people. During the Velvet Revolution, Vaclav Havel read a poem by one of my authors, Jaromir Horec. The book I published by him was called, “Aneska Ceska (Agnes of Bohemia)” translated by Jana Moŕavková Kiely in 2009.

This year I published “My Life with Blondie” by Jiri Klobouk, translated from the Czech by Helena and John Baker. I mention Jiri because he sent me two photos of Vaclav Havel and him from a theatre awards ceremony in Prague in 1965. I have both photos on my wall at the Červená Barva Press Studio. This means so much to me and his kindness is so appreciated. It is things like this and the writers I correspond with or meet that keep me going.

Since 2006, the press has published 116 books and chapbooks. We publish poetry, fiction, plays, memoir, translations, and soon will publish a book of essays from a writer in Estonia. We have published many translations and soon will be focusing more on that.

Writers from all over the world have been published from such countries as Indonesia, Czech Republic, Northern Iraq, Romania, Ukraine, Argentina, Mexico, UK, Canada, Poland, Sweden, Belgium, France, Turkey, New Zealand, South Korea, and the USA.

I would like to mention the other half of my press, William J. Kelle. He does the chapbooks, cover designs, and website. He has been with the press from the beginning and is such an asset to the press. He works hard for me doing all that I ask.

Finally, I’ll end this question with saying that I love being my own boss and I mostly solicit writers whose work I love but keep the door open for writers to submit once a year. Once in a while, I find a gem of a book by keeping the door open. Discovering writing that I love makes me so happy and I just have to publish it!

Soul-Lit recently published your inspirational poem, “A New Place.” What I admire is the paradoxical relationship between the active self and the contemplative voice in the poem. The form of the poem moves from the external to the internal. Which came first when you sat down to write this poem, the form or the subject? And, how did one shape the other?

The subject always comes first for me when writing. From there, the poem starts and I write until finished. Then, edit.

I have always been a more contemplative lyrical poet, focusing on the metaphysical, angels, afterlife, and death. My writing leans toward these topics because they are my favorite to write about.  Once I pick what I’m going to write about, such as “A New Place,” writing about the outside helped me write in the more contemplative voice and focus on the inside. I have an inner voice in most of my poems.  For me, the subject and form go hand in hand.

Sometimes the title comes after the poem is written and other times, it is the first thing I write, which influences what I will write about.

In your latest poetry collection, Pleasure Trout, you include an author’s note which states: “Don’t try to understand what is written here. Just enjoy the nonsense.” The poems in this collection are usually anchored by a definitive first line, but then veer off to a surreal landscape of images and sounds. Poems like “Punitive Operations,” “Regret,” and “Sparse” in particular capture this spirit. Is the point of creating a new poem from one already written in a different language a means to tap into your subconscious?

I would say the poems in Pleasure Trout are more stream of consciousness. I let them come out as they will on the page.

When mistranslating, it could be the look of the word in the poem, the spacing of the poem, or what it reminds me of.  That is how the subject and poem comes out for me.  It is challenging to translate a foreign language, but if you translate as fast as you can, it is so freeing.

I don’t know the language so of course it will be totally different. It should be. I came up with some bizarre images and topics for the poems. Somehow, the words just fell on the page where I wanted them to be especially in the poem “Punitive Operations.” I also liked adding some drama to the poems. It is the actress in me!

Tell us about your future projects.

I am working on finding a publisher in the spring for my manuscript, Whiteness of Bone. This is about the atrocities committed in El Salvador, Rwanda, Guatemala, Congo and numerous other countries.

I plan on completing a chapbook and a memoir this year. The chapbook is poetry and titled, I Wish Francisco Franco Would Love Me. The memoir is titled, Screaming for Paul. It is about the 1960’s and the silly things I did to meet bands. I was such a teeny bopper and a screamer! It is amazing I have any voice at all for how I screamed. Parts of it are pretty hysterical and funny.