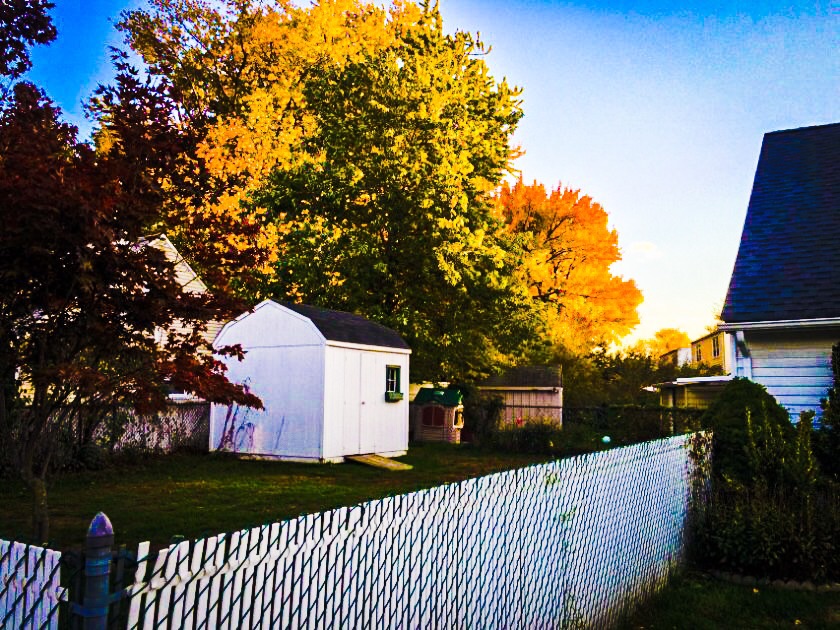 We got married in our hometown, even though we met in Portland. The only decision we made regarding the wedding was that we would go home to get married, and then we would go somewhere else. He didn’t want to go home, but we couldn’t stay in Portland. Too many roommates, and my job had gotten awkward. Those are good reasons when you’re in your early twenties, which I was.

Lots of things have happened, since we got married, to all the people I’ve known.

One afternoon shortly after we’d gotten engaged, we were driving past one of the largest city parks in our hometown. The leaves were changing. It was still hot and bright outside. Our car was having some problems. We’d been working on it all day long. We were tired and dirty, and he’d cut his finger badly while trying to remove a stubborn bolt. The car was still making a peculiar grinding noise. We knew we had more work to do, if we were to drive the car out of our hometown once we were married.

There was a large group of people at the south end of the park. As we came closer I saw that they were holding signs. Some of them were stop-sign shaped. The signs said, “Choose life!’ and “Stop abortion!”

I leaned my head out the window and screamed, “FUCK YOU ALL.” My fiancée was embarrassed. Later, he hugged me for a long time without saying anything.

Our hometown included a lot of reasons for me to not marry him. For example: my brother, who told me I was too young to get married. He was bitter though, because earlier that summer he’d gotten chlamydia from my best friend, and she’d never called him again. I was still in love with my ex, and sometimes I ran into him—but I could never get back together with him, because I found out that when we were trying to patch up our relationship, he’d had a one-night-stand with my best friend. There was the guy who’d had kind of a crush on me since high school, who tried to nag me out of getting married, but I didn’t have to listen to a word he said—he was something of a sociopath; he’d recently had a loveless affair with my best friend. From time to time I’d run into a boy I’d crushed on intermittently since we were children, but he wasn’t a factor, really, since he was about to have a baby with my best friend.

My best friend wouldn’t talk to me about any of those things. And I was worried about her. None of that, I thought, is the behavior of a happy person. But she’d been angry at me for a while. For leaving my hometown to go to Portland. Abandoning her. She didn’t tell me this, of course. She told other people, behind my back. Because that’s how it is, in hometowns.

My fiancée and I went to a house party the day after Thanksgiving. It was funny, we hadn’t known each other in our hometown, in part because of our seven-year age difference. But in the almost two years that we’d lived in Portland, our respective social circles had circled each other, spiraling until they became a Venn diagram, and then pretty soon they merged and became the same circle. Just bigger. If our hometown had been any smaller, this would have already happened years before. If it had been any bigger, it might never have happened.

There were about five waitresses at this party. They all worked at the same diner. They all worked with my best friend, but she wasn’t invited. She always got stiffed by the customers, the waitresses all said. It was because of her attitude. I told them that she just had a mean-looking face. Really, she was pretty nice, she just had a chip on her shoulder because her mom was such a bitch to her. “Everyone’s mom is a bitch,” said one of the waitresses. “You grow out of taking it out on everyone else,” said another waitress. Yes, but she’s younger than we are, I pointed out. Some of the waitresses were even a few years older than me. At least one of them was almost ten years older than her. I said I was conflicted about inviting her to the wedding. “Don’t,” they said. They were more my fiancée’s friends than my friends. It was up to me, who I wanted to invite.

I didn’t want to invite some of my ex-boyfriends. The one I was still in love with, but also not another one, a different one. The one who had gotten kind of violent when I had broken up with him. I told lots of people at the party not to tell him about the wedding.

My best friend brought her fiancée along to the wedding. He’d been invited too because I’d crushed on him since we were children. They were going to have a baby. She was twenty. At least a few years younger than all the rest of us.

Later, after my husband and I had moved to New Orleans, one of the waitresses at the diner came to visit us. She was my husband’s friend, not mine. My best friend didn’t work at the diner anymore, she had quit once she became too pregnant to want to be on her feet all day.

I told my husband’s friend about what my ex-boyfriend had said to me at our wedding. “He threatened to push me down a flight of stairs,” I told her.

“I know,” I replied. “I told him that if he killed me, he’d go to jail for manslaughter. He said that he’d be willing to rot in jail for the rest of his life, just knowing that I was dead.”

She said, “Well he’s going around town telling everyone that you killed his baby.”

I said, “You know that he left me, right? He went to Bellingham to get some heroin and he never came back. He knew I was pregnant.”

She didn’t reply to that, so I didn’t know if she knew those things already, or if she just didn’t have anything to say about it. I wanted to tell her that my husband was nowhere to be found while he was threatening to push me down the stairs. My husband was in another room, comforting a female friend who was crying that he had gotten married.

She said that my ex-boyfriend had begun dating another of the waitresses at the diner, and he had recently given her a black eye. Then they had left town together.

I was unhappy in New Orleans. I wrote to my best friend about it. I was lonely. She didn’t respond. She was busy postponing her wedding, and beginning her adult life, which was to be a life of extreme unhappiness. Maybe I sensed this. I wanted to go to her. I thought she needed support. But she didn’t respond to any of my postcards or letters. She didn’t acknowledge the baby gift I sent her. She never answered her phone.

I told my husband I wanted to go back to my hometown. He said he’d never go back, unless it was to be buried. I told him I would leave him, and I didn’t care if he came with me or not. We had a fight. He said, “Why did you marry me?” I said, “Because I thought you would protect me.” He asked me to compromise, to go somewhere other than New Orleans. So we went back to Portland.

In Portland, I asked him to have a child with me. He said never. I said, “What if I got pregnant by accident?” He said, “I couldn’t do it. I’m sure I’d fall in the love with the baby, but I’d never get over hating you, for trapping me.”

I live in Portland now. We’re not married anymore. Nobody protects me now except me.

Lise McMitchell is a writer and editor who lives near Portland, Oregon. Her short work has appeared in Red Fez, and she is the author of several novels, some of which are even finished. Her novel Poison Toleranceis currently available for purchase.